GET BRITAIN BUILDING INTERVIEW IN FULL

Hannah Vickers is interviewed in The House on ACE's Budget asks, Project Speed and recovery

hen a once-in-a-lifetime crisis hits, the road to recovery is complex. Post-COVID, the UK’s towns and cities are likely to look very different, catering to the needs of a workforce whose habits have fundamentally changed. Job creation will be a priority in an economy that’s taken a battering during the pandemic – and time is of the essence as people reel from a prolonged period of hardship.

But the “old” issues are still there, too – the need to tackle climate change has never been more pressing, and the Government’s promise to “level up” regional prosperity now feels more relevant than ever. Never mind the complexity of the undertakings at hand; you’d be forgiven for asking if some of these ambitions are even compatible with each other – can we really build faster and greener?

Hannah Vickers is optimistic – and not just because she heads up the Association for Consultancy and Engineering (ACE), which has a huge role to play in the process. For her, the UK’s recovery plans are not only compatible, but interdependent – and reshaping urban centres is a prime example of this.

“It’s actually a unique convergence of societal need, the Government’s desire to level up, and business sustainability and employment for our industry,” she says. “If you’ve got a lot of people commuting, working and using their towns and cities in a different way, the right thing for levelling up has probably fundamentally shifted in the past six months. And as an industry, we need to make sure our capability is brought to bear in informing those decisions.”

Where we&#x27;re lacking long-term certainty at the moment is around local programmes Hannah Vickers

Vickers, who took over the role of CEO at ACE in 2018, believes the way to reconcile promises that can sometimes seem contradictory is to back high-level rhetoric with tangible action plans. Take, for example, Project Speed – the Government’s strategy for an accelerated but “clean and green” recovery.

“When Project Speed was first announced, the industry’s interpretation of it was ‘faster’, which could cut across green commitments,” she explains. “But now that we’re starting to see some of the detail around things like the planning consultation, that helps with Net Zero ambitions because it raises the quality and allows you to put Net Zero as the conditionality on some of the changes.”

Describing herself as “quietly confident” about Project Speed, Vickers calls for more detail and more action. She argues that if national policy statements aren’t updated to reflect new, greener ambitions, challenges like Heathrow Airport will continue to arise. “There’s a need to go back and cascade Net Zero from the 10-point plan into the policies we actually abide by during the planning process,” she warns. “That’s quite an important technical loop to close.”

For Vickers, nailing the specifics is vital in every aspect of the drive to build back better. “We’re going to see a lot more repurposing of buildings and it’ll have a quick impact, so it ticks all the Project Speed boxes in terms of places the government may want to invest. But let’s think about putting in the right conditionally and tax incentives to ensure the private sector does that in a Net Zero way. We need to be blending these ambitions.”

In ACE’s recent Spring Budget submission, Vickers highlighted the National Infrastructure Bank as a key tool in boosting industry confidence and activity – and naturally, she’ll be keeping a keen eye on the detail.

“[The scope of the Infrastructure Bank] takes the ambition of local leaders and turns them into a tangible programme of projects that is funded, has private sector buy-in and forms a proper partnership between the public and private sectors. That’s what’s missing at the moment – something to act as that catalyst. Strangely for a budget ask, it’s not about more money necessarily; it’s about that confidence.”

And that confidence is now key for her industry as it endeavours to be a constructive partner for Government over the next few years. Vickers describes the current situation for most of ACE’s members as “settled”. Having largely protected their emerging talents through the use of the national furlough scheme, businesses are now starting to look positively towards what the next six to 12 months hold.

“We’re in a fortunate position, in that what the industry and its businesses need is very similar to what the government wants in terms of policy outcomes. Where we’re lacking long-term certainty at the moment is around local programmes.”

This certainty, she argues, would give definition to the plans cities and towns can make as they recover from COVID – in turn providing stability and hope to local communities. With the right policies in place, ACE’s members can invest in the regeneration projects to help the Government deliver a levelled-up economy as it builds back better, greener and faster.

“It’s not too much of a hard sell, I don’t think,” she laughs. “I’m not arguing against Government policy – what I’m trying to do is take that from high-level rhetoric into actual commitments at the budget.”

This interviewed originally appeared in The House magazine, the publication for politicians and policymakers working in the heart of Westminster, and its sister website, Politics Home. 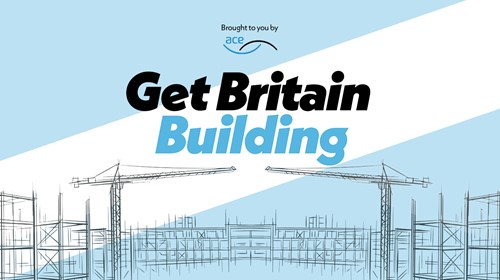 Hannah was previously chief executive of ACE and is now chief of staff at Mace.

Rosemary Beales on how standard agreements can help you be prepared for the unexpected.

Melania Santoro shares how Arcadis are creating an inclusive environment.

INWED22: How can men support equality in the workplace?

Wojciech Szewczak explores how men can play their part.